Tuning In: Brian Steinberg on the TV Season and Changes to the TV Business

Will goody-goody shows ever be the rage again?: If you watch a lot of TV, you’re no doubt inured to the increasing levels of violence, profanity and sexual references your favorite programs display with great regularity. Heck (and we’d use a different word to make our point if we weren’t so concerned about our readers’ sensibilities), CBS even points to the scatological with its new Thursday-night sitcom “$#*! My Dad Says” — which airs during TV’s so-called family hour between 8 p.m. and 9 p.m.

It’s hard to put this particular genie back in its bottle, especially when TNT offers the gritty “Southland,” HBO’s popular “Boardwalk Empire” regularly features nudity and FX’s “Justified” seems to revel in alcohol, violence and having a good time.

Yet the Alliance for Family Entertainment, a consortium of big-spending advertisers including Procter & Gamble, Walmart and AT&T, argues that viewers want less of this stuff and more programs that the entire family can watch.

According to the new annual study by this committee, which operates under the aegis of the Association of National Advertisers, 61% of 2,500 TV viewers questioned said they see TV as an “escape from reality” and 79% said that “TV watching is primarily for entertainment.” Only 21% said they “want TV that drives dialogue and conversation on the big issues facing society.”

At a time when TV gives us water-cooler shows like “Mad Men” or “Boardwalk Empire,” marketers are pushing for more vanilla? Why? In a finding that could be frightening for a major advertiser, the Alliance found 63% of viewers claiming advertisers are ultimately responsible for the content that is on TV. In 2009, only 43% of viewers agreed with that notion.

Marketers are already afraid of boycotts and outsize publicity stemming from the placement of their ads near content that can be considered salacious. In 2008, for example, Yum Brands’ KFC expressed concern about the CW’s “90210,” after its ad appeared during a show in which a male character was spotted sitting in a car receiving sexual favors from a female classmate. CBS ran into challenges the same year when it tried to launch “Swingtown,” a show that depicted couples engaging in the swapping of partners.

With broadcast outlets seeking the broadest possible audiences, however, they usually have to rely on the broadest possible material. If viewers really disliked risqué material, they’d flee. But they haven’t. Cable content has only gotten more gritty in recent years, and with broadcast in dire need of top ratings, CBS, NBC, ABC and Fox can’t exactly run “Romper Room” across the prime-time grid.

The Alliance isn’t seeking that, of course, just more TV programming that families can watch together, on the order of “American Idol” or … well, name another all-ages selection available in the current TV season (we’re not certain “The Simpsons” is for everyone).

Some marketers have been taking matters into their own hands. Procter and Walmart joined forces to create their own movies, such as “Secrets of the Mountain” and “The Jensen Project.” The ratings for these shows were OK, not great, suggesting this type of stuff can certainly fly once in a while but may not necessarily be sustainable over an entire season.

But as TV becomes much more disparate and personal, thanks to new technology, family-friendly content may have more sway. Imagine being able to order any number of song-and-dance shows or P&G-Walmart dramas via video on-demand or streaming video. When TV advances to a medium in which consumers actively call up their own prime-time grid, rather than sitting down on a couch to watch what executives say the lineup should be, so-called “family entertainment” could become a more common choice.

Nesvig Nuggets: Fox ad-sales chief Jon Nesvig hasn’t left the building yet (he’s set to retire at the end of the year), but Joe Flint of The Los Angeles Times hurls any number of questions at him about how life in the TV-ad sales trenches has changed since three broadcast networks ruled the roost. Best bit: Mr. Nesvig recalls Visine asking for its ad to be placed next to a scene in the epic film “The Godfather” in which Moe Green is shot in the eye — all the better to burnish its slogan, “Visine: It gets the red out.”

We’d like to ask Mr. Nesvig some more nitty-gritty, like how one runs commercial-free episodes of “24” knowing that the move could rankle TV-station affiliates, or how one allows a five-second ad for AOL to run at the end of ad breaks, when the move could potentially upset other advertisers who would like similar treatment. But we’ll save that for another day, perhaps.

Tuning In is an ongoing series of commentaries by Ad Age TV Editor Brian Steinberg on the TV schedule, the ads it carries and changes within the industry. Follow him on Twitter. 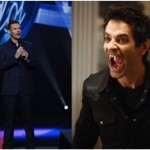